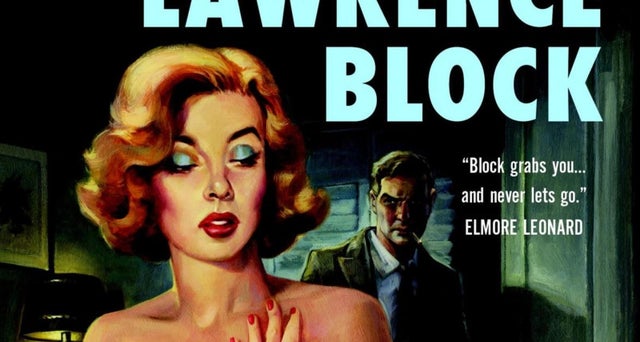 Written in the winter of 1959, Sinner Man is Block’s first novel-length piece of crime fiction. Prior to this, he had mostly written erotica novels and crime stories for magazines.

According to the author in his extensive, fascinating afterword, he had started out intending to ‘move up to crime novels’ and then, eventually, to ‘move up to the pinnacle of mainstream literary fiction’.

It took nearly a decade for him to find a publisher for Sinner Man, so it wasn’t his first crime novel to be published – Fawcett Gold Medal published at least two others before this one saw the light of day. And when it did, it was under a pseudonym and a different title (Savage Lover). Block ‘never saw a copy’.

After many years hunting for it, when he finally held the book in his hands, he felt ‘it needed work.’ This reprint by Hard Case Crime, 48 years after its first publication, is an updated version with a revised opening.

It tells the story of Donald Barshter, an insurance salesman who after a heavy day of drinking –consuming a couple of rounds of martinis for lunch, half a pint of scotch at the movie theatre, and another two-fifths at home – has an argument with the missus and in a fit of rage ‘accidentally knocked his wife’s head in’.

He decides not to call the police and ‘not to go to court or to jail’ and not to ‘get caught at all.’ Acknowledging that he is now ‘a murderer in the first and foremost degree,’ he plots his escape, becoming a man on the run.

Although at times amusing, Barshter is very much a despicable, remorseless, violent brute, able to hurt and kill without compunction. A sometimes abusive husband, he holds his wife responsible for ‘provoking the blow, for falling clumsily, for landing wrong’.

After killing her, he remains in the house for the next 57 hours as if nothing has happened, and after having ‘stuffed the corpse in her closet,’ he packs a bag, goes to the bank to withdraw cash and takes a train to Buffalo to begin a new life.

Apprehensive about prospective employers doing background checks on him, he seeks employment from ‘the local crime syndicate’ and invents a new identity for himself: Nathaniel Crowley, ‘a professional criminal’ from Miami, ‘a floating hotster looking to put down roots.’ He chooses Buffalo because it is a relatively small city with few tourists and he doesn’t expect to run into anyone he knows.

He succeeds in finding employment with the local mob, led by the ‘mountainous’ Lou Baron, and the work suits him. Beating up guys who are late on their payments – ‘fists on their face and feet on their ribs’– is something he is good at. And he doesn’t draw the line at murder.

We are led to believe that his wartime experiences serving in the army have provided him with the training necessary to kill in cold blood. Emotionless, disinclined to dwell on the past, Barshter comes across as violent by nature. The cruel, callous way he treats the new woman in his life, Annie Bishop, is no different to how he treated his wife.

Unsurprisingly, it is difficult to like Barshter or, for that matter, any of the characters in Sinner Man. However, Block is a naturally talented writer, very adept at getting readers invested in his stories and making you truly care what actually happens to the central characters. This book is no different in that respect, and by the end you can’t help but smile at the ironic twist and find yourself eager to get started on another of his crime novels… and fortunately, there are plenty of them.

My review of Sinner Man by Lawrence Block was published in the Lancashire Evening Post on December 1st, 2016, and syndicated to 25 newspapers across the UK. Archived online access to these reviews as they originally appeared, featuring my byline, can be found at these weblinks: