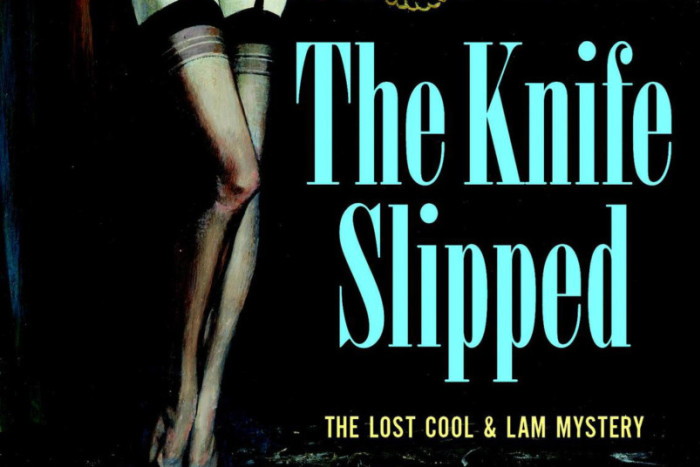 After a forty-six year lull, the frosted office door of ‘B. Cool, Investigations’ swings open once more as the lovable private eye team of ‘hard as nails’ boss Bertha Cool and her ‘little runt’ operative, Donald Lam, set to work on a tough new case in The Knife Slipped.

Hired by a distraught wife and her mother to shadow Eben Cunner, suspected of being an adulterous husband, Cool and Lam’s seemingly straightforward investigation becomes one of their most challenging and highly perilous.

Eben, it turns out, is a double-crossing crook with multiple identities and when he’s bumped off, Donald is left holding a smoking gun, framed for murder.

Pitted against crooked cops and powerful gangsters, it takes all of Bertha’s cunning and Donald’s gutsy determination to find a way out of their predicament and put the murderer behind bars.

Although his regular publisher, William Morrow, rejected the book in 1939, and the author subsequently discarded it without reusing any of the material, this little gem of a novel has finally found its rightful place on the shelves of bookstores worldwide after being mislaid for 77 years and turning up in an archive at the University of Texas.

The wonderful uniqueness of larger-than-life Bertha Cool and her quirky rapport with gutsy Donald distinguish this from other detective novels. Although underhand and conniving (forever after ‘a piece of the cake’), you can’t help but love the boldly confident, shrewdly independent and strong female PI. She is such a dominant force that, by comparison, Donald comes across as the damsel in distress.

Condescendingly described by Bertha as a frail weakling who ‘can’t take a beating’ or ‘dish one out’, Donald certainly does get knocked around a lot, suffering so many blows to the head and blackouts that it’s a wonder he doesn’t change professions! Bertha comes to his rescue numerous times, fending off cops and gangsters intent on doing away with her employee.

While Donald may be the narrator, it’s clear that Bertha is the heart and soul of the novel. Her ruthless qualities only serve to make her all the more endearing – cold, cruel, manipulative, ‘profane as hell,’ she’s also shockingly miserly, clinging to money ‘like a barnacle caressing the side of a battleship.’

In fact, she is so stingy that Donald can barely do his job properly. The ‘piece of junk’ rental car she gives him can’t keep up with the car he’s tailing, and his daily expenses are barely enough to cover three phone calls and a hamburger.

The only time Bertha doesn’t economise is where food is concerned. In one scene, the breakfast she orders could feed a party of six. According to Donald, she’s so big that she jiggles, rippling across a room like ‘a cylinder of jelly sliding off a tilted plate.’

Although he doesn’t say it, it’s evident that Donald feels enormous affection for her. And who can blame him? For all her faults, it’s difficult not to marvel at Ms Cool and relish every snide remark that tumbles from her gluttonous mouth.

Interestingly, The Knife Slipped was intended as the second instalment in Gardner’s Cool & Lam mystery series, which began in 1939 and ended in 1970, numbering 29 books (this being the 30th). Unlike publisher William Morrow, Hard Case Crime, who reprinted another Cool & Lam novel, Top of the Heap, some years ago, made a wise decision in releasing this never-before-seen novel.

Amusing, exciting, and perpetually entertaining, The Knife Slipped highlights what a remarkable writer Erle Stanley Gardner was and how even splendid novels by big name writers can sometimes slip through the net. Thankfully, this one got a second chance. Make sure to add it to your Christmas list.

My review of Erle Stanley Gardner’s never-before-published Cool & Lam mystery novel, The Knife Slipped, was published in the Lancashire Evening Post on December 9, 2016, and syndicated to 25 newspapers across the UK. Archived online access to these reviews as they originally appeared, featuring my byline, can be found at these weblinks: