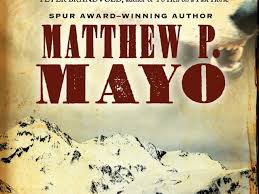 Lost, alone, and trapped in a little valley in the Northern Rocky Mountains in 1849, a desperate 14-year-old girl must find a way to survive the savage winter weather and frequent attacks by hungry wolves, grizzly bears and mountain lions in the historical fiction novel Stranded.

Best known as an author of popular western novels, Matthew P. Mayo produces his finest work of fiction to date with this compelling, heartbreaking account of Janette Riker’s harrowing experiences while stranded for months on end in the Rockies, battling blizzards, frostbite and floods, and a vast array of ravenous, menacing creatures.

Based on a true story and told in the form of journal entries, Mayo’s novel begins at the very start of the Riker family’s ill-fated journey westward toward Oregon Territory.

Gripped with wanderlust, Janette’s father, a widower for six years, is keen to leave behind their family home in Bloomington, Missouri – the house he and his departed wife built themselves with little help from anyone else – and head out west. Although in no hurry to leave the only home she has ever known, Janette has no objections to the trip, and so she and her father and two brothers set out in mid-June in search of a better life.

Aware of ‘the horrors that can happen to people travelling west by wagon,’ Janette is not prepared for the tragedy that awaits her.

Three months into their trip, ‘with the most difficult stretch still to come’ as the final three-day journey to Oregon will be through mountain passes, they decide to stop and replenish their depleted food stocks. Her 12-year-old brother, Thomas, ‘an uneven mix of good and rascal, of laziness and kindness,’ and William, aged 16, ‘who sometimes seems older than Papa,’ set off for the day with their father to go buffalo hunting. They never return.

Alone except for two oxen, and unsure of the best path through the mountains, Janette has no choice but to stay put. Armed with an axe, a shotgun and a hip knife, her best hope for survival is to build a shelter, set traps for rabbits and other small game and recollect every scrap of advice her father ever gave her.

Precious knowledge, like how to sharpen a blade with a rough-smooth stone and the correct way to swing an axe, are advantageous when it comes to constructing the ‘square-shaped woven beehive’ that she hopes will protect her against the winter wind and prowling ‘wolves and coyotes and whatnot.’ And knowing to stand stock-still when in the presence of a grizzly bear saves her life.

But with dozens of panting, yipping and growling beasts ‘clawing and fighting and pounding a ring around the wagon,’ Janette is faced with a series of seemingly insurmountable challenges.

When her food source disappears, as wolves kill one ox and leave the other mortally wounded, and a mountain lion, digging down through the packed snow and clods of earth and canvas that form the walls of her meagre shelter, bursts in on her in the dead of night, her chances of survival seem as bleak as the freezing, unforgiving mountain climate.

Thankfully, the shocking, grisly images and nerve-jangling tension are blessedly relieved by engaging recollections of pre-trip conversations with her father and reminiscences of the jittery, spidery-haired boy Cal Bentley and his beet-red face, ‘like a hammer-struck thumb,’ on the embarrassing day he tried to ask her out on a date.

As he has proven many times in the past, Matthew P. Mayo is highly adept at carving out gritty, authentically told frontier tales with tough yet empathetic female characters at the helm. In Stranded, he has created his most fascinating, inspirational character yet.

Placed in such a horrifying and distressing situation, while at the same time having to overcome the sudden loss of her family, it is remarkable how Janette Riker is able to adapt to her hostile environment and rise to every new challenge. The reader can’t help but be inspired by her bravery, determination and extraordinary resilience.

Gripping, unsettling, and deeply affecting, Stranded is a powerful and unforgettable tale of courage and endurance in the face of adversity. A remarkable, must-read novel.

My review of Stranded by Matthew P. Mayo was published today in the Lancashire Post on May 16, 2017, and syndicated to 25 newspapers across the UK. Archived online access to these reviews as they originally appeared, featuring my byline, can be found at these weblinks: