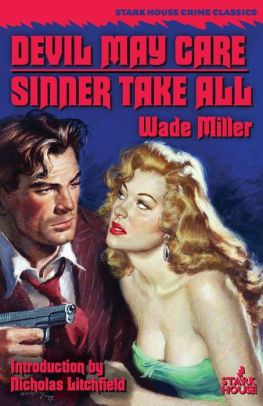 Among the novels I’ve read this year, Devil May Care and Sinner Take All rank as two of the very finest. Both were penned by the writing duo of Robert Allison Wade (1920–2012) and H. Bill Miller (1920 –1961), a couple of close friends who wrote a fair number of big-selling novels in the crime, mystery, and thriller genres during the 1950s and 60s. Without doubt, their most fruitful collaboration was Badge of Evil, a manuscript adapted for the screen as Touch of Evil, directed by Orson Welles and starring Welles, Charlton Heston, and Janet Leigh. Other novels by Wade and Miller were adapted to the screen, though, strangely, Devil May Care, considered by some as the duo’s best, didn’t become a movie (despite actor James Cagney’s efforts), and it hasn’t been reprinted since the Fawcett Gold Medal printings in the 1950s.

As hardboiled suspense novels go, this one certainly has a strong cinematic feel to it. A brief plot summary goes like this: An old friend of Biggo Venn persuades the former Soldier of Fortune to travel to Mexico to deliver a deathbed confession that will exonerate a deported racketeer. The straightforward job is anything but and, soon after his arrival, Biggo’s contact is murdered, he’s drugged, his luggage is stolen, and then he’s roughed up, shot at, and finds himself in jail. In the treacherous small town of Ensenada, he is caught in the middle between two feuding gangsters, never quite sure exactly who he can trust and doubting himself and his ability to make it out alive.

Very much a character-driven story, this taut, tense, brooding page-turner is very stylishly written and especially exciting at times. The same might be said of the subsequent novel in this collection, Sinner Take All, written ten years later. This one is a slick, multi-viewpoint assassination tale in which General Gayoso seeks to assassinate the reclusive rebel Bruno Lazar at Lazar’s best friend’s funeral, whom Gayoso arranged to be murdered. The brilliant plan goes awry when the marksman he hires, Jack Cox, begins to have second thoughts about pulling the trigger.

Some might deem this a routine thriller with few twists and no real surprises, but the methodical care to pace and plot elevate the story. Cox and Lazar’s protégé, Dorlisa Von Ritter, are nicely drawn characters, and you can’t help but tip your hat to Wade and Miller for their proficiency in developing an authentic-seeming romance between them. As with the previous novel, the story builds to an exhilarating climax.

Recently, Bookgasm gave a favorable review of this latest reprint of Wade Miller novels. “It is easy to see why Miller was among the most popular authors during the heyday of Gold Medal paperback originals. And thanks to this third series of reprints, both new and long-time crime fiction fans can experience (or re-experience) the continuing appeal of this collaborative team,” writes book critic Alan Cranis. “Editor and author Nicholas Litchfield provides an introduction that traces Wade Miller’s career and shows how the characters and themes of these two novels contribute to the pair’s long backlist of novels and short stories.”

I’m proud to have provided the introduction to these fine tales, which are available again after being out-of-print for too many decades. Snatch up your copy while you have the chance. They are obtainable from all good booksellers, including Amazon, or directly from the publisher: http://starkhousepress.com/wademiller.php