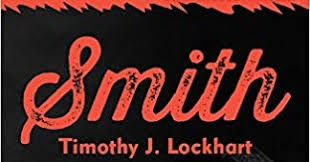 Blackmailed into working for a secret government organisation, a hard-bitten former servicewoman overcomes a perilous training programme to become a highly skilled and extremely resourceful assassin in a taut, action-packed thriller.

In his explosive debut novel, Smith, former US Navy officer Timothy J. Lockhart draws on his years of experience working with various government intelligence agencies to craft a gripping tale of international intrigue.

The action focuses on a secretive corporation, calling themselves ‘the Enterprise,’ which is intent on eliminating undesirable political figures, terrorists, and influential leaders of regimes they believe pose a threat to US national security.

Not connected with the government, the organisation is free to engage in clandestine overseas operations without repercussion. In truth, their clients are ‘a few federal agencies of the government,’ providing them with the money, information and resources to succeed.

The Enterprise also has a highly classified programme in place to identify military personnel coming off active duty, and is keen to target those with the necessary talents and motivations to work with them.

One such person of interest is the tough-as-nails loner who goes by the alias Smith. Mentally scarred by a traumatic experience serving in Afghanistan, Smith, now 26 years old, has since turned into a revenge-fuelled killer.

Having gunned down a man who once served alongside her in the Army, she is captured while making her getaway and brought to the Enterprise headquarters to meet the Director who is keen to recruit her.

His powerful bargaining chip is the surveillance footage of her shooting the victim from distance with a sniper rifle and evidence connecting her with the murders of two other GIs, both of whom served with her in the same unit in Afghanistan.

Facing life in prison should the evidence be turned over to the police, she is forced to accept his offer, agreeing to kill for them.

The highly unpleasant, incredibly risky job entails going to Japan to stop a violent group of eco-terrorist who are planning on attacking a nuclear plant, putting it out of commission, and going undercover in Central America to kill a self-proclaimed Communist who heads a labour union and is said to harbour presidential ambitions.

As dangerous and tricky as the proposed missions are, the hardest part is surviving the four months of rigorous training. Few of the new recruits ever make it out of the boot camps alive.

Smith, however, is a different breed of soldier. Brave and resilient, hardened by a difficult childhood and ordeals she suffered while in the military, she is able to cope with whatever obstacles are thrown in her path.

The Army has ‘made her a killer,’ teaching her how to ‘shoot someone at long range, short range, and point-blank range,’ and how to fight with a knife or her bare hands, but the Enterprise teaches her ‘how to kill coldly, ruthlessly, remorselessly.’

Odious secondary characters like the lecherous, scheming Assistant Director and Dietzler, the antagonistic fellow recruit, keep you rooting for Smith, a persecuted killer trapped in a role she yearns to escape, learning to accept that there is no going back and ‘no way out.’

Solidly entertaining, with an interesting female lead character who has plenty of grit and toughness, Smith is a notable hard-boiled noir that hits the ground running, with guns blazing and knives slashing, and doesn’t let up until there are ample corpses piled high.

My review of Smith by Timothy J. Lockhart was published in the Lancashire Post on June 20, 2017, and syndicated to 25 newspapers across the UK. Archived online access to these reviews as they originally appeared, featuring my byline, can be found at these weblinks: