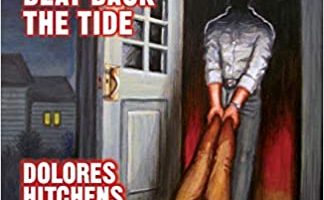 Reprinted from the late 1950s comes a tautly plotted, gritty tale of gang wars, racketeering, police corruption, and the dangers faced by a murder witness who risks his life to give testimony against powerful mobsters.

Late American author Ovid E. Desmarais, better known as Ovid Demaris, was a journalist and bestselling author of thirty books. Praised for his investigative reporting on organized crime, political and business corruption, gambling and the underworld, several of his nonfiction books enjoyed a combined 64 weeks on the New York Times bestseller list and have been translated and published in twenty-two countries.

It begins with Alan Avery, a Hollywood high school teacher, husband, and father-to-be, rushing to the drugstore late one night to refill a prescription for his pregnant wife, who has a migraine.

On the way home, an incapacitating bout of severe heartburn forces him to sit down in a parking lot, and as he recovers, he watches two thugs beat and knife a man, then slit his throat.

When they load the dead body into the trunk of their Cadillac and drive away, Alan, who has memorized the license plate, reports the crime to the police.

It turns out that the car belongs to Joseph Ricca, a big-time crook who was recently arrested on a drugs charge and is presently out on twenty-five-thousand-dollars bail. Prostitution and narcotics are Ricca’s domain in Los Angeles, but he’s also ‘rated among the best in the business of execution, with at least thirty murder to his credit.’

The victim, Slick Danchick, was about to ‘turn state’s evidence in the narcotics case involving Ricca and half a dozen other hoods’ to avoid a ten-year prison sentence.

Alan, a ‘soft’ man who is made ill by the sight of violence, is a ‘fearless idealist’ who puts his faith in the police being able to protect him and his family. Urged by his wife, his work colleague, and an old school friend to change his statement, Alan refuses to compromise his principles, determined to ‘do his duty as a citizen even in the face of danger.’

However, powerful crime boss Marty Kahn, who runs ‘all the bookmaking, gambling and extortion’ in L.A., relies on Ricca to keep the mafia from muscling in on his turf. Working with his smart, formidable lawyer, Bryce Barker, Marty finds a way to get the charges dropped against Ricca and Abe (the Axe) Doto, his top henchmen.

Then the mighty, vengeful hoods set their sights on the well-meaning if naive Alan Avery, aiming to wipe him off the face of the earth.

Anthony Boucher of the New York Times was lavish in his praise of Demaris’s abilities as a writer, expressing great appreciation for the fast tempo, the effortless way the author weaves together the various plot strands, and his realistic, ‘unglamorized portrayal of mobsters as the contemptible monsters they are.’

What is especially appealing about this novel is the great care Demaris takes to flesh out his principal characters. As a result, the reader roots for Alan and his wife, Edie, and the noble Sergeant Ernie Tucker, who carries a burning hatred for ‘the hardened criminal who has made crime a big business’ and secretly strives to clear his late father’s blemished reputation as a crooked lieutenant.

And the reader is sickened by the cruel Ricca and the power-hungry Marty and sympathizes with the brilliant lawyer Bryce Barker, a desperately unhappy alcoholic who has achieved fame and fortune at the cost of his integrity and wishes he could forget his past and escape his situation.

Highly engrossing, briskly paced, and with colourful and convincing characters, The Hoods Take Over is a grisly yet powerful hardboiled crime story that shocks, fascinates and moves the reader. Those with a predilection for gangster novels should put this at the top of their reading list.

My review of Ovid Demaris’s excellent ‬The Hoods Take Over was published in the Lancashire Post on April 29, 2019, and syndicated to 25 newspapers across the UK. Archived online access to these reviews as they originally appeared, featuring my byline, can be found at these weblinks: