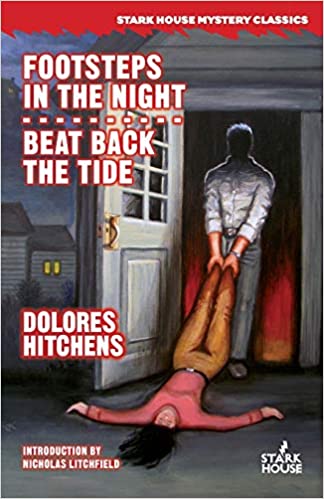 Lately, I’ve been reading a lot of Dolores Hitchens novels — fortunately, there’s plenty to pick from and, thanks to Stark House Press, reprints of her books are hitting the shelves again. Very popular in her day (primarily, the 1950s and ’60s), she was one of those authors who had enormous critical and commercial appeal. At a time when male authors monopolized the mystery genre, Hitchens was ranked as one of the nation’s leading mystery writers. Prominent authors, journalists, and book reviewers, like Anthony Boucher, sang her praises for good reason. Her vividly drawn characters have depth and personality, and she has a masterful ability to shock and unnerve and escalate suspenseful situations.

Last year, I was fortunate to be able to provide the introduction to STAIRWAY TO AN EMPTY ROOM and TERROR LURKS IN DARKNESS. These unpredictable and unnerving tales are a couple of gems that are well worth seeking out. FOOTSTEPS IN THE NIGHT and BEAT BACK THE TIDE are arguably even better. They are available this month from Amazon or directly from the publisher.

A fresh, astute review of these books was recently published in Bookgasm. “The two stand-alone novels gathered here by Stark House Press, FOOTSTEPS IN THE NIGHT and BEAT BACK THE TIDE, demonstrate Hitchens’s skill at presenting multiple characters within a single framework,” notes reviewer Alan Cranis. “Nicholas Litchfield, a noted editor, reviewer and author, provides an introduction where he notes how Hitchens made her mark in the mostly male-dominated publishing world of her time, and how she incorporates her fondness for closely held secrets and skeletons in the closet into her novels. Hitchens was another of the numerous authors who enjoyed brief popularity during her writing career, but was quickly forgotten when her novels and stories went out of print. But as these two republished novels aptly demonstrate, Hitchens can easily be enjoyed by a new generation of mystery fiction fans, and is well worth a rediscovery.”

Incidentally, on December 4, 2018, I reviewed END OF THE LINE, a collaboration between Hitchens and her second husband, Hubert Allen ‘Bert’ Hitchens, who was a railroad investigating officer. Archived online access to my review for the Lancashire Post, which was syndicated to twenty-five other newspaper across the UK, can be found at this weblink (as it originally appeared and featuring my byline):
https://web.archive.org/web/20181204151430/http://www.lep.co.uk/lifestyle/books/end-of-the-line-by-bert-and-dolores-hitchens-book-review-1-9475166