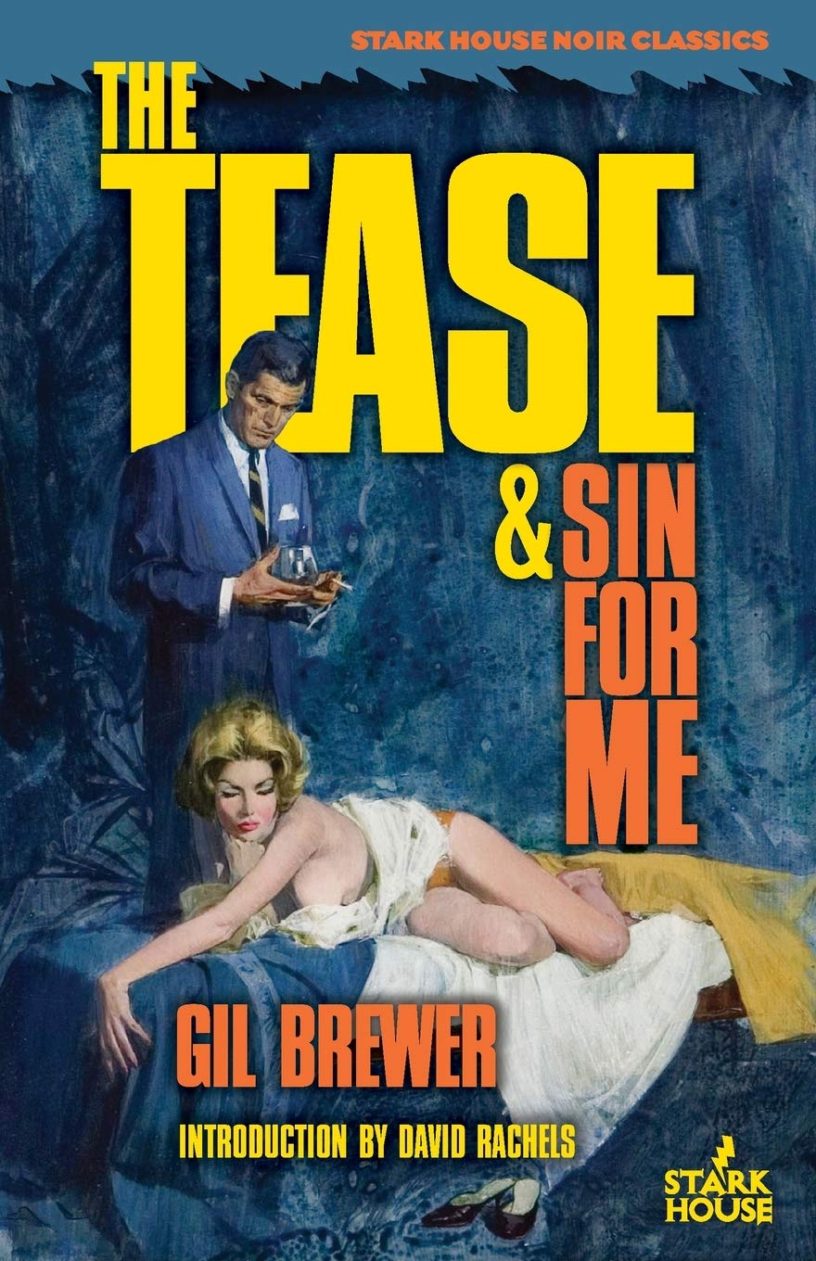 Stark House is responsible for publishing many of Gil Brewer’s (1922-1983) works—and not merely reprints. Numerous previously unpublished novels and short stories have found their way into print, and I’m hoping more will emerge in the future. Their most recent two-in-one crime noir reprint is something of a collector’s volume. Flaunting a nice adaption by Jeff Vorzimmer of Roger Kastel’s original cover illustration for The Tease, it comprises two nicely paired tales published in 1967 by the short-lived Banner Books, a paperback imprint acquired by the Hearst Corporation that mainly focused on crime and mystery novels. Despite some decent covers and solid writers, Banner made little impression on the paperback market, lasting only nine months and producing thirty-six titles (four per month).

David Rachels, the man responsible for bringing many of Brewer’s short stories to light, notes in his brief but enlightening introduction: “These novels found Brewer working in his class vein, chronicling the bad decisions of men desperate for money and vulnerable to women.” Forgotten since 1967 and deserving of a second printing, The Tease and Sin For Me, which were written “at the midpoint of his thirty-two-year career,” were “the final two noir novels that bore his name.”

The first yarn, which is perhaps the better of the two, features a marginally sympathetic lead: Wes McCord—a reckless, alcoholic philanderer with money concerns and marital problems. He loves his wife, or so he believes, but his weakness for women and money, poor judgment, and idiotic decisions land him in a heap of trouble.

Within hours of his wife walking out on him, Wes encounters a beautiful woman on the beach near his home in Tampa, Florida. The voluptuous, highly desirable Bonnie Ward is accustomed to turning men’s heads, but when she appears before Wes, asking for help, he’s incapable of turning her away. The fact that she’s naked probably doesn’t help.

When she claims that a dirty old man at her motel attempted to rape her and that she killed him in self-defense and fled the scene of the crime, Wes doesn’t turn her in. And when she baits him with a story about a family inheritance and then offers him a 50/50 split of $320K, he doesn’t merely help her, he lies for her and shields her from the police.

Of course, it’s all a cock-and-bull story, and Bonnie, although only eighteen, if that, is a man-eater. A womanizer he may be, but she is clearly more than he can handle, and before long, Wes is on the run from the police and hardened thieves and desperately trying to rescue more than just his marriage.

Despite its contrived opening and abrupt ending, Brewer piles on the action and suspense to deliver a thoroughly engrossing, thrill-ride. True, few of the characters seem capable of rational thought, and everything Wes or Bonnie does leaves you scratching your head with wonder. Still, you can’t help but marvel at Brewer’s natural ability to keep his readers frantically turning the pages, captivated by Wes’s zeal for money and curious to see how it will end.

Sin for Me shares similarities to Brewer’s previous novel. Like Wes, the lead here—Jesse Sunderland—is another lowly real estate agent desperate for cash and heavily into his cups. He was driven to drink by a woman—Germaine—who is now his ex-wife. Although he hates her for the way she treated him, and for leaving him for another man (the wealthy crook Paul Knowles), he still wants her back.

When a gangster’s moll promises him half the take from a bank robbery, amounting to more than $300K, Sunderland jumps at the chance—especially since the loot is stashed away in Paul Knowles’s house. However, when he breaks into the house and discovers Paul dead—shot through the heart, no less—he realizes he has been picked for a patsy and that his chances of ever seeing the money are about the same odds as winning back his ex-wife.

What follows is a frenetic chase, with the panicked protagonist desperately evading the law while trying to hunt down the money and the culprit in order to clear his name.

As with many of Brewer’s past efforts, the fierce, careening story whisks you along at a wild clip, hitting a number of potholes along the way but never crashing and burning. And if the protagonist lacks appeal and the plot is gauchely far-fetched, at least you can’t fault the author for lacking imagination. The confrontations, car chases and gun battles are thrilling, making this crime caper a sheer joy.

You can read more about the title on the publisher’s website: http://starkhousepress.com/brewer.php