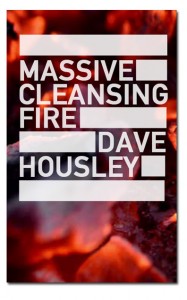 Despite its leanness, Dave Housley’s latest story collection, Massive, Cleansing Fire, is full of gloriously witty moments and uniquely fascinating characters and situations. Made up of individual stories, each one ending in a fire or focused on accounts of those caught up in a wildfire apocalyptic event, this is a creative, provocative, and refreshingly different sort of book. Key to the narrative are several interesting recurring characters who link many of the stories together: John, the restless former combat photographer; his tormented neighbor, Terry; and Terry’s unhinged brother-in-law, Randall. All these deeply flawed, oddball characters struggle in different ways to cope with their environment. John is an especially curious specimen. Proud yet sympathetically drawn, he is clearly intended as a source of amusement. No longer serving in the military nor stationed in places like the Sudan, Afghanistan, and Iraq (or, as his wife puts it, “gallivanting all over the place”), he has returned to civilian life and taken a mundane job at a museum for the sake of his pregnant wife who is due to give birth to their first child in a matter of weeks. He desperately clings to his past accomplishments; his impressive photography portfolio, which always receives an “awed” reaction from people, consists of images of “severed body parts, burning twisted metal, mass burial sites,” and “a Sudanese ten-year-old with a machine gun.” The pride he once took in his work has evaporated. In place of modern instances of death, destruction, and decay, he now photographs ancient examples in the form of “the skulls of beaked whales, ghost orchids, [and] stegosaurus bones.” Away from the exhilarating dangers of a combat zone, with “bullets biting through the air,” he feels trapped in his suburban life and disillusioned at work.

He would put away his camera and trudge homeward.

He tried not to think about what was happening to his body and mind, to his combat photographer’s soul, but it was a long walk and unlike similar walks he might have taken in Mogadishu or Kashmir, there was nothing to do but think.

Although all the stories share some type of fiery theme, those that separate from the fire and brimstone narratives are the most effective. The story concerning seven clowns and a monkey crowded into a tiny car, accelerating “in an increasingly unlikely circle” around the circus ring and “threatening to careen out of control at any moment” is one of the highlights of the collection. Each clown, aware of the “applauding and whooping and whistling audience,” is both semi-focused on their performance and, at the same time, consumed with their own personal problems, grievances, and career aspirations. Shorty, a sour dwarf with pent-up aggression for his colleagues and the world at large, smarting from an serious injury, is one of several on course for self-destruction: “He can picture it—the crash, the tangle of limbs, the gasps from the crowd, blood and bones and gristle and fire.”