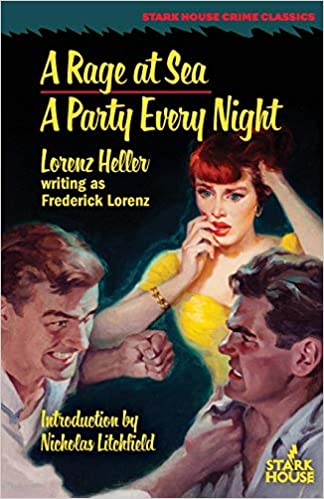 Recently, the website Paperback Warrior, which posts vintage fiction reviews and features regarding the action-adventure, hardboiled crime, western, pulp, and espionage genres, included a review of the collection A Rage At Sea / A Party Every Night, which was published on May 25. Here’s a snippet of what they have to say of the author and these two long-forgotten crime stories: “Frederick Lorenz was the pseudonym used by Lorenz Heller (1911-????) for a handful of paperback crime novels released by Lion Books in the 1950s. The New Jersey native worked as a seaman on a freighter, so it’s only fitting that I’m introduced to his body of work through his shipwreck novel A Rage at Sea from June 1953. Best of all, the book has been reprinted by Stark House Crime Classics as a double along with Lorenz’s A Party Every Night and an informative introduction by Nicholas Litchfield. A Rage at Sea isn’t particularly action-packed, but the author’s excellent writing keep the pages flying by. Recommended.”

You can read the full review of A Rage At Sea on their website, here.

While researching Lorenz Heller — the limited, yet fascinating news articles spurred me to hunt for more data on him — I couldn’t help but marvel at his creative output. Newspaper sources claim that, by the mid-1950s, Heller had authored approximately 500 short stories and published fourteen novels. Alas, I can’t imagine ever being that productive.

Of the novels and short stories I read, Heller seemed to take great pains to flesh out his principle characters. Consequently, stormy personalities like Frank Dixon, the boozy skipper of the yacht in A Rage at Sea, and Vance, the hard-luck bartender in A Party Every Night, come across as impressive, well-drawn characters able to move, intrigue and motivate the reader to invest in their adventures.

For an interesting assessment of these two novels, check out the book review by Alan Cranis published this past week in Bookgasm. “This new Stark House Press edition presents two novels originally published in the early and mid-1950s, and showcases Lorenz’s skill at characterization,” writes Cranis. “While there is plenty of mounting suspense in A RAGE AT SEA, there are no mysterious deaths or other crimes. And A PARTY EVERY NIGHT only resembles a murder mystery when the death of the husband is investigated. Yet, again, Lorenz’s characters are what keep the pages turning, as we wonder want new complications the players will encounter. Editor and author Nicholas Litchfield provides a detailed introduction, tracing Lorenz’s writing career and the development of his character-driven technique. Crime fiction fans, even those who favor complex plots over characters, will find much to enjoy in these two novels.”

Reviewer Paul Burke was also impressed by these two tense, atmospheric novels, remarking that the author “understood people and how they mess up, how they function in extremis and how dark a place the world can become when you’re down.” In his recent book review for the UK online magazine Crime Time, he writes: “As Nicholas Litchfield’s introduction points out; it’s character which drives plot in Lorenz’s fiction. In both novels the dialogue is crisp, the story edgy and populated by eccentric, volatile characters who just can’t get a grip on life.”

This splendid Stark House Press reprint of A Rage at Sea and A Party Every Night by Lorenz Heller writing as Frederick Lorenz (with an introduction by yours truly) is available on Amazon or directly from the publisher. And you can access Paul Burke’s full book review for Crime Time here, and the Bookgasm review by Alan Cranis here.